The 15 Best Tip Jar Ideas For Your Business

Setting out a tip jar can be a great way for customers to show their appreciation for quality service. But with the pace of life these days and all the things clamoring for your customer’s attention, the tip jar may go unnoticed (and be underused). The best way to make your tip jar stands out is to get creative with the label. The word “Tips” on a card taped to the jar doesn’t cut it anymore. To really turn heads and get customers to part with their hard earned dough, you’ve got to appeal to their emotions. Humor and controversy are great for this and nothing will fill your tip jar faster than making your customers laugh, asking them to take a side, or both. This article lists 15 of the best tip jar ideas for your business.

1. Business In The Front, Party In The Back 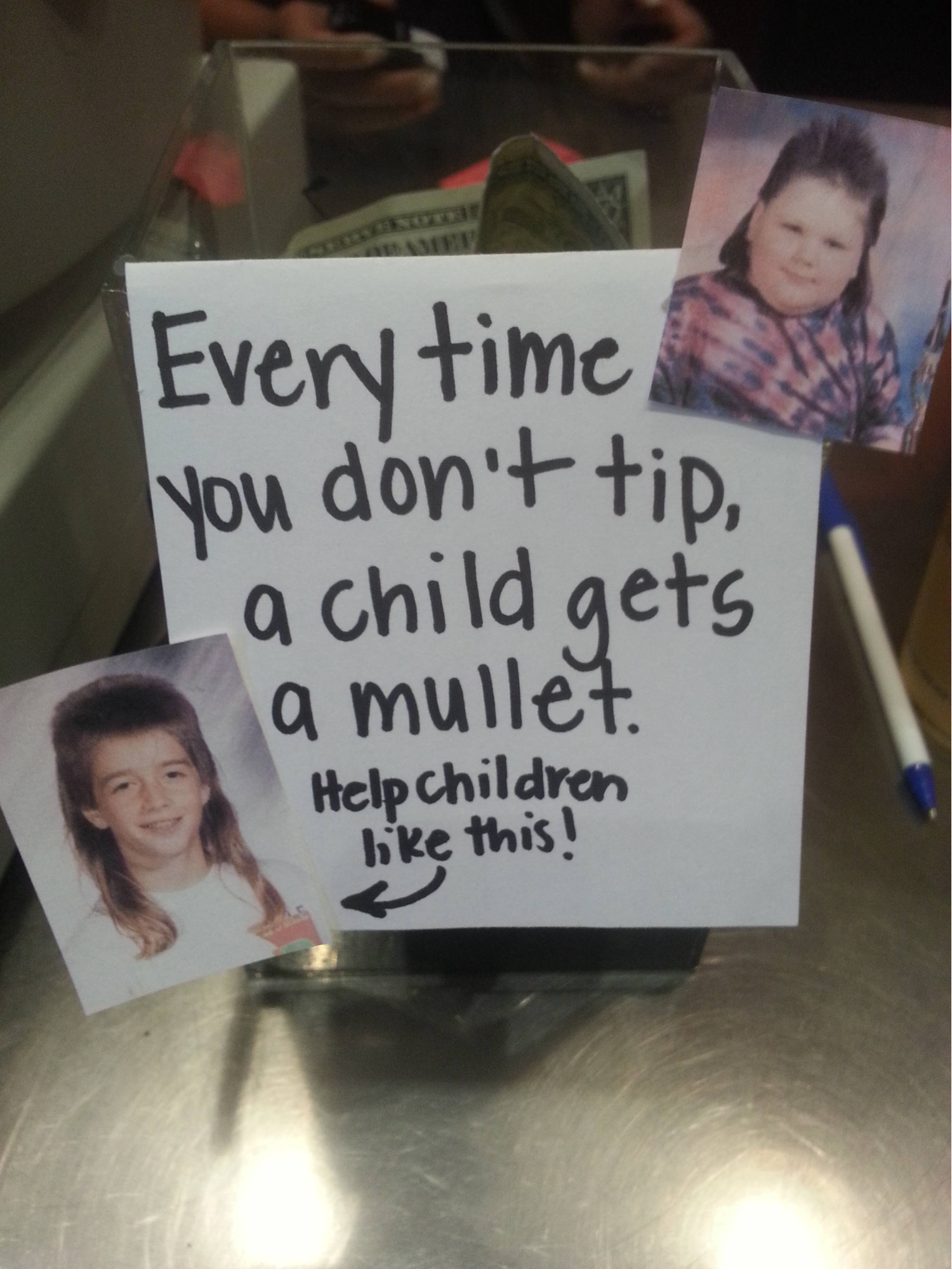 The mullet is one of those haircuts that make you wish you could go back in time to prevent them from ever happening (like 80s bangs). That’s why this plea for tips is so effective: it’s cringe-worthy and funny at the same time. Sure your tip might not actually prevent mullets, but even if there’s one chance in a billion that it could, you’d have a moral obligation to make it so. If you can give a child a mullet-free life, he or she might have a real chance. And that’s good for all mankind. 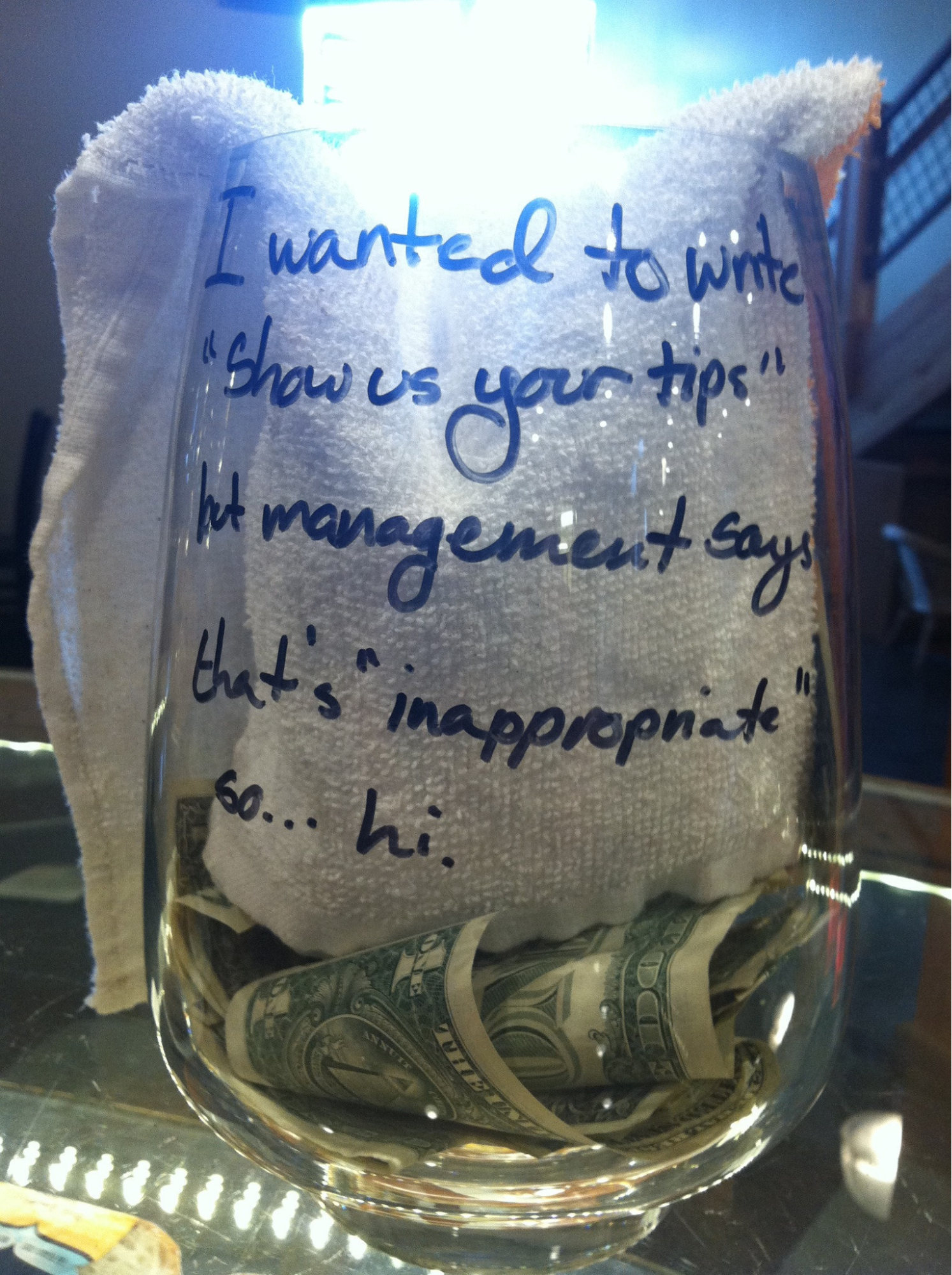 This tip jar idea is great for sheer cleverness. The humor is what makes us smile and drop in a few bucks. But the irreverence also draws us in and makes us feel like we’re sticking it to our own boss. Add to that the fact that it’s not as obvious—remove the towel and the “inappropriateness” gets lost in the background even though it’s still there—makes it a subtle yet fitting addition to even a more upscale establishment. 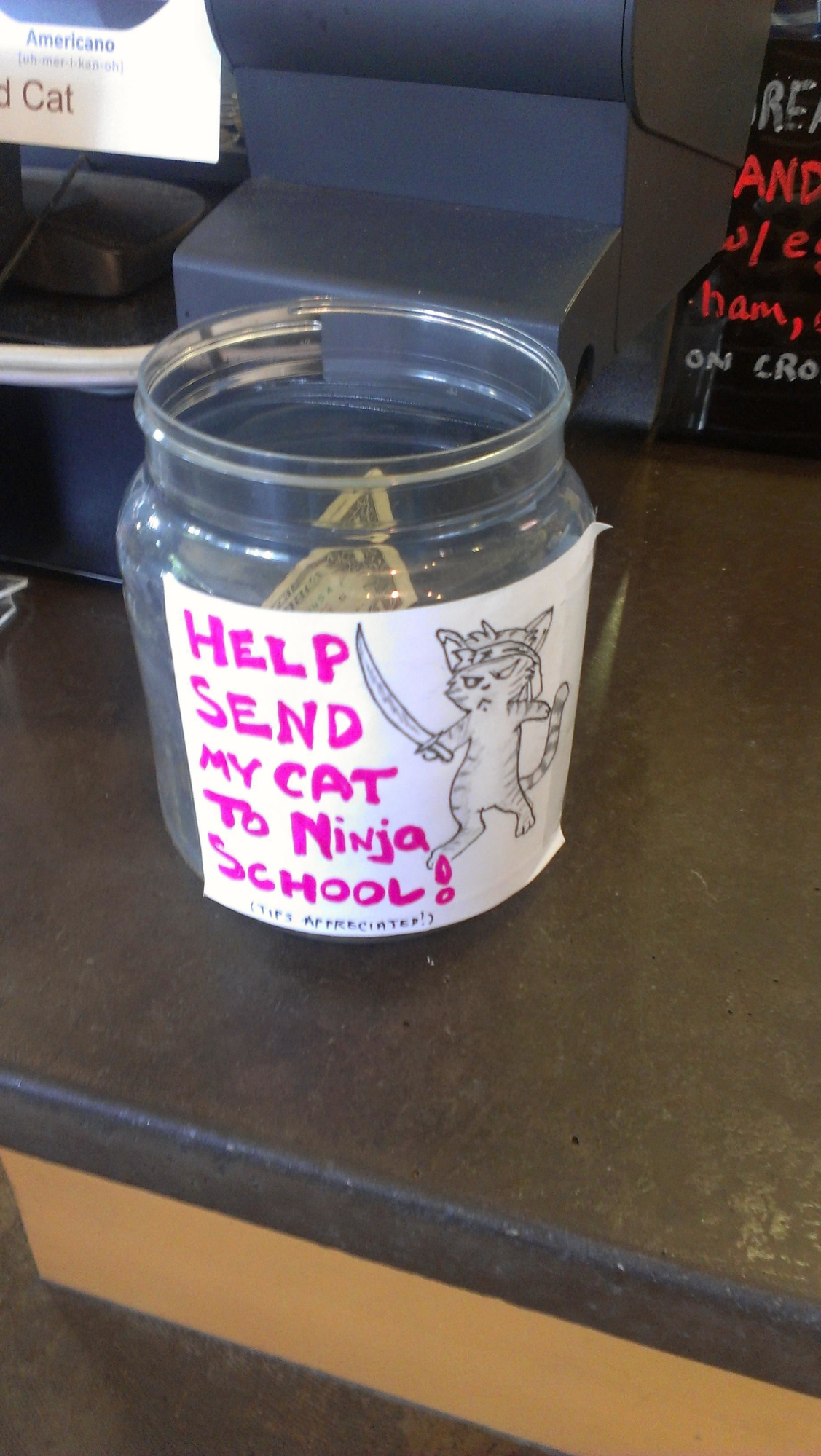 When the answer is “Ninjas”, you automatically win. That’s why the premise for this tip jar is so effective. It starts with a game-winning idea and then adds a dash of cute and funny to top it off. And really, who wouldn’t want to see a ninja cat? Even though the illustration looks less like a ninja and more like one of the pirates from The Swiss Family Robinson, we get the drift.

4. Battle Of The Sexes 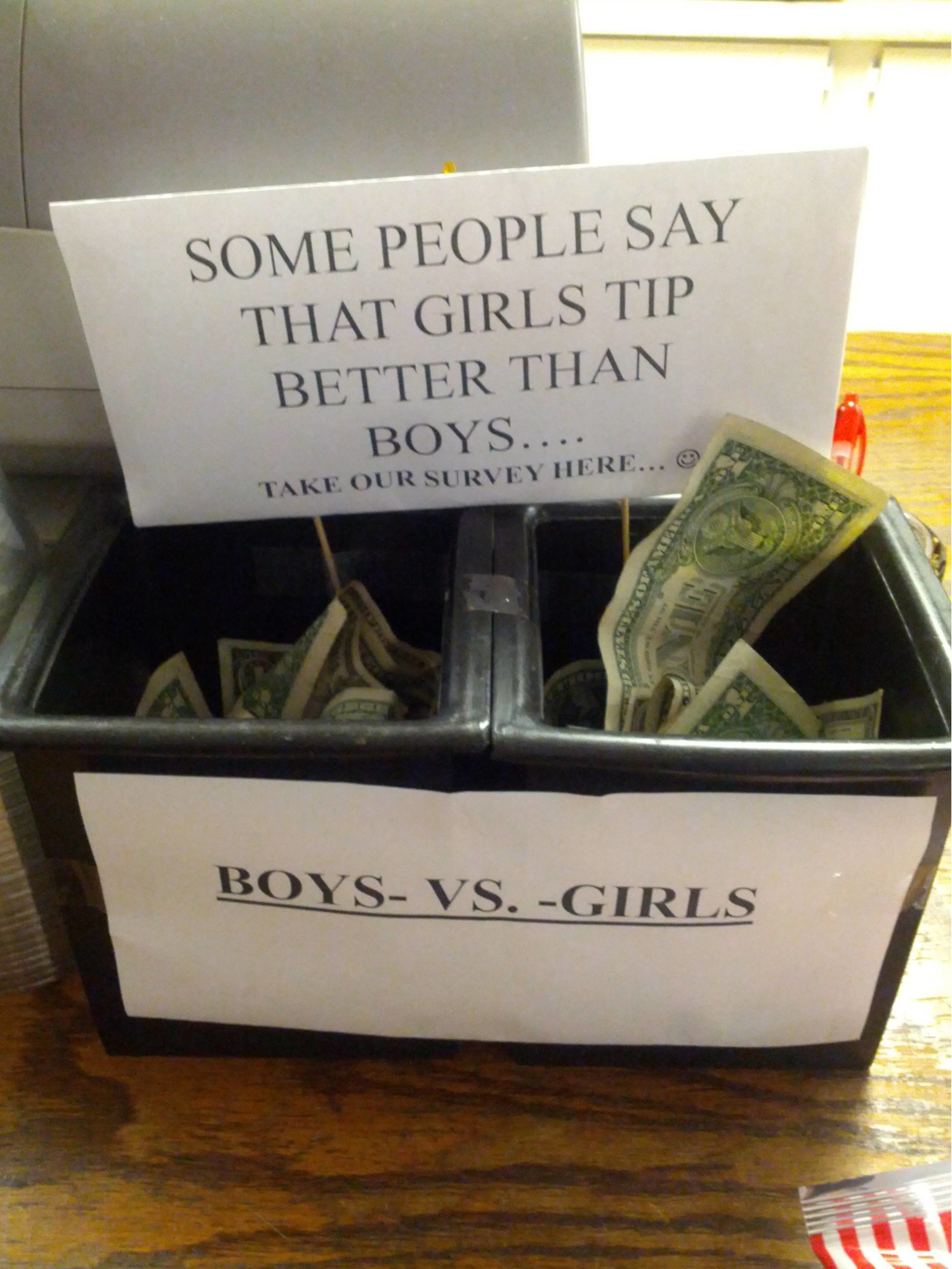 Everyone likes to express their opinion. And what could be a simpler question than boys or girls? This tip jar idea is appealing in its simplicity and for the fact that it doesn’t rely on cultural references or information that the customer might not be privy to (like music or movies). 100% of the people who read this, assuming they can read, will understand what’s going on and want to get involved. That means more tips for your employees.

5. An Erudite Way To Beg 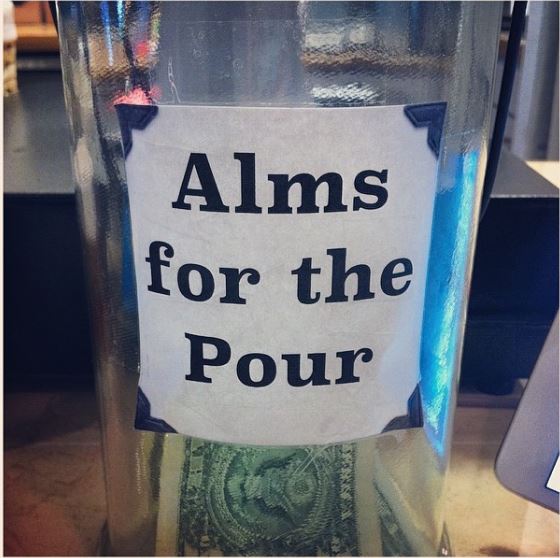 We don’t use the word alms very much anymore, but it’s a great way to refer to spare change. Historically, alms were money or food given to poor people. Those of less affluence would stand on a corner, hold out their hat, and plead with passersby saying, “Alms for the poor.” It’s a great way to ask for money without directly asking for it. This tip jar is also effective because it capitalizes on the similar pronunciation of ‘poor’ and ‘pour’ to help indicate where the money goes (to those doing the pouring). It’s a very smart way to ask for tips and we give our commendation to whomever thought it up.

6. Take It From The Queen 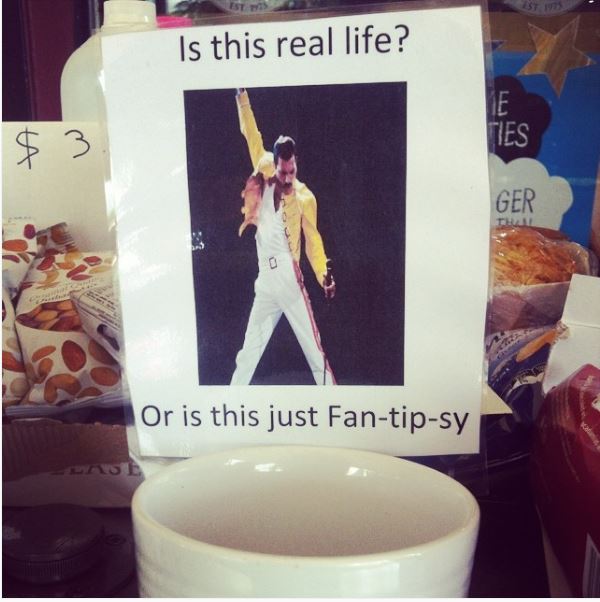 We give this idea an A+ for concept but an F for execution. Everything is pretty much available anytime on the internet so why couldn’t the person who came up with this idea take 15 seconds to look up the lyrics? Literally, it took us 11 seconds to find the correct words: “Is this the real life? Is this just fantasy?” That would make for the more accurate: “Is this the real life? Is this just fan-tip-sy?” You could even go so far as to write, “fan-TIP-sy” just to make your point. And why is “Fan-tip-sy” capitalized? It’s these kind of small errors that would turn off a discerning tipster. Get it right next time and maybe you’ll get more. 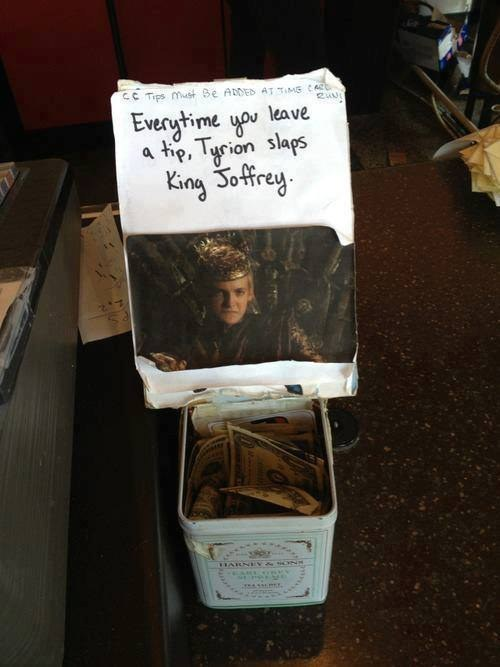 We don’t even watch Game of Thrones but we found this tip jar idea very effective. King Joffrey is obviously a huge jackwagon and deserves to be slapped. Giving money to make that happen just seems right. 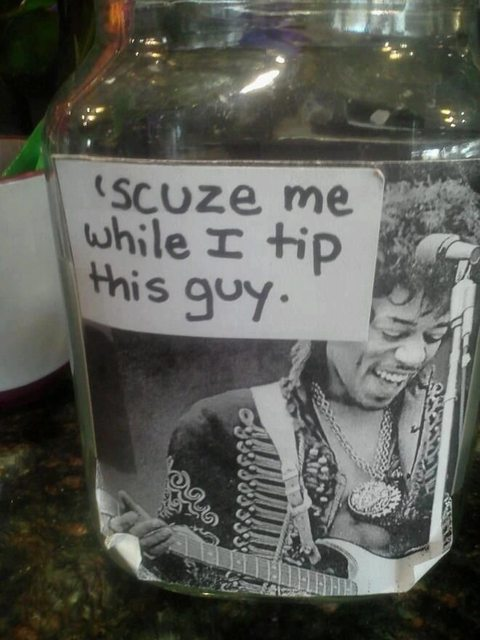 This particular line in Jimmie Hendrix’s song Purple Haze is probably one of the most misheard lines ever. That’s why it makes for a great tip jar idea. It builds on the oft-misquoted line “Excuse me while I kiss the sky.” The way it was sung, many heard the completely different, and much more amusing, “Excuse me while I kiss this guy.” That then morphed into this creative plea for a quarter or two.

9. Vanity Is A Powerful Motivator 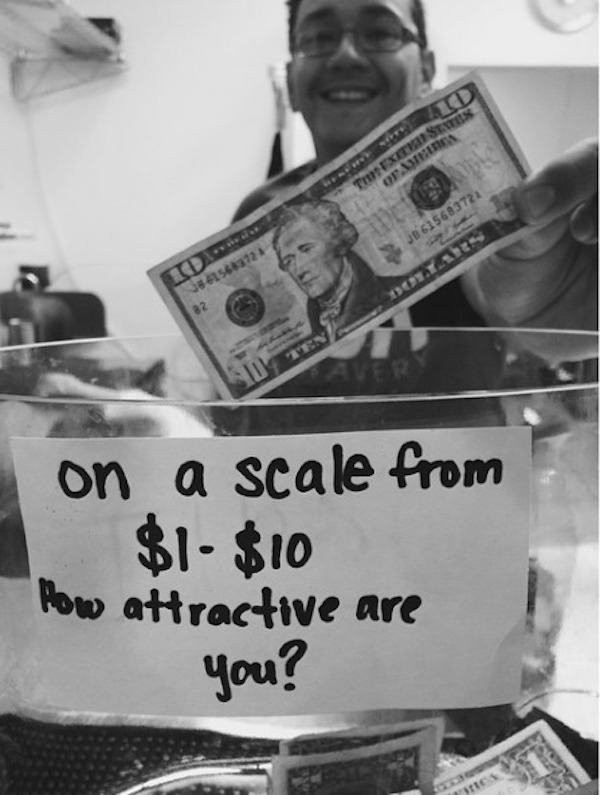 This tip jar idea appeals to your customer’s vanity while at the same time encouraging them to give generously. Everyone wants to be thought highly of. So just knowing that others will see what you put in and judge you for it means that you need to go big in this situation. It’s a very clever psychological ploy that will have the container filled in no time.

10. Twenty Years Is A Long Time To Wait 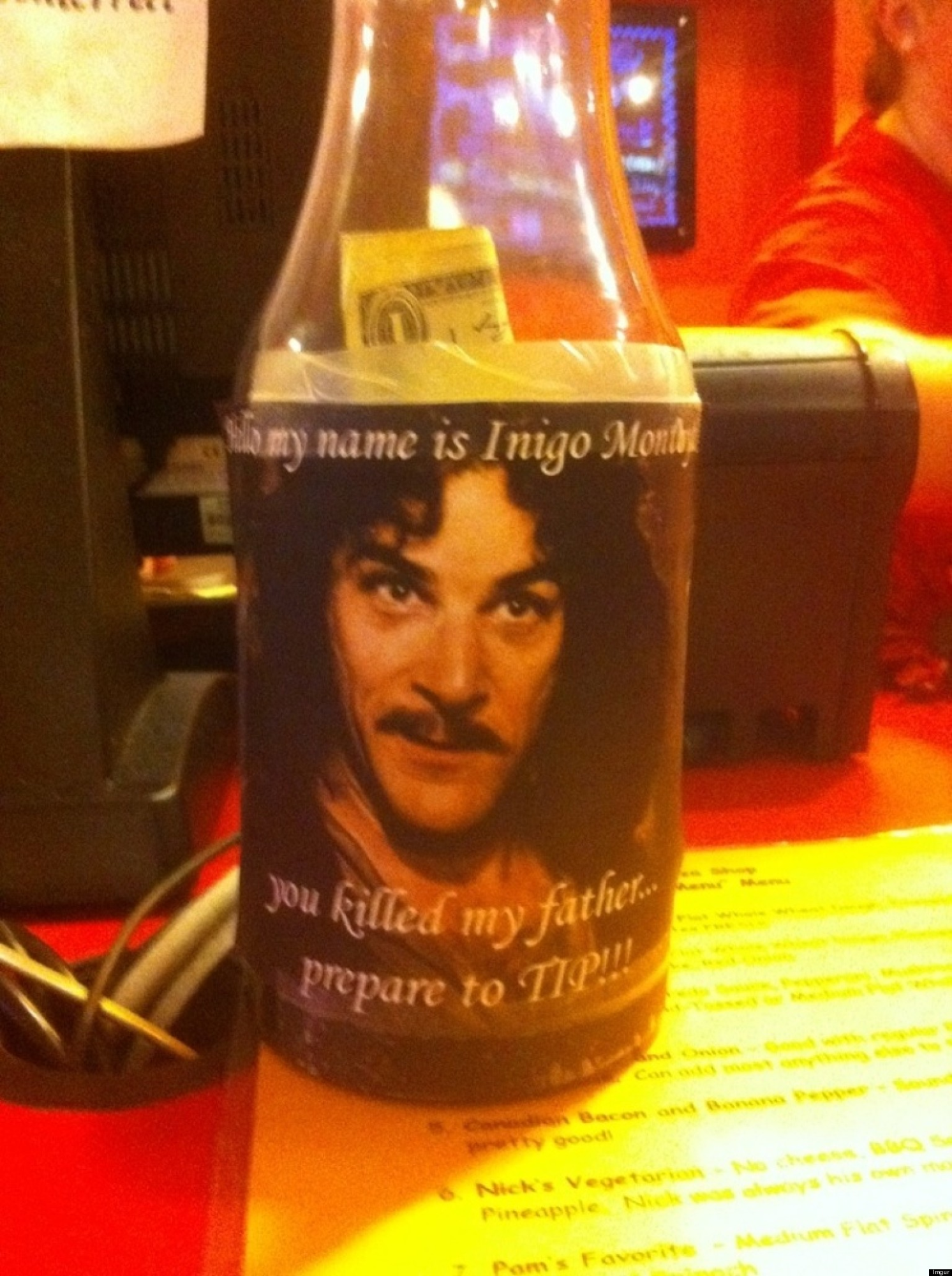 The character of Inigo Montoya from the movie The Princess Bride is so iconic, it has been a part of pop culture for almost 30 years (the movie was released towards the end of 1987). We’re dead serious when we say that there isn’t a person alive on this planet that doesn’t love that dedicated Spaniard (trust us, we checked). So using his most famous line to solicit tips is just a good idea. And, yes, Mr. Montoya did, in fact wait 20 years to find the six-fingered man (trust us, we checked). 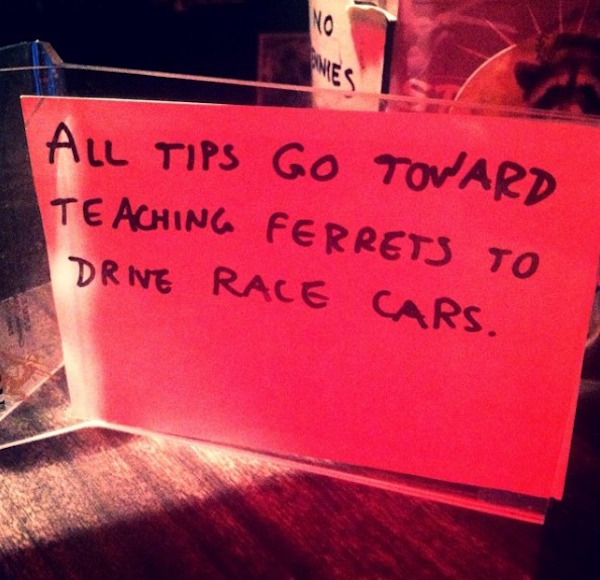 Sometimes absurdity is the best way to separate customers from their hard-earned money. This concept is certainly absurd. But even the mere mention of ferrets going fast brings a smile to our faces. Cap it off with a picture a cuddly ferret (like the one behind the sign) and you’ve got a winning combination that is sure to please.

12. There’s Only One Right Answer 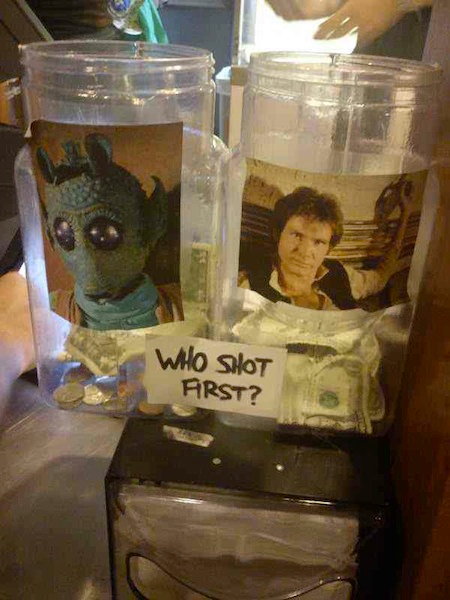 This tip jar idea is particularly interesting because it plays on the heated debate about who shot first, Greedo or Han Solo. In the original Star Wars movie (episode IV), it was sort of ambiguous. Then George Lucas in his infinite wisdom (Jar Jar Binks, anyone?) changed it to make Greedo’s death seem like an act of self-defense rather than an act of aggression. That was unfortunate because even at 5-years-old when we first saw the original movie in theaters, we knew that Han shot first.

13. The Container Should Be Bigger 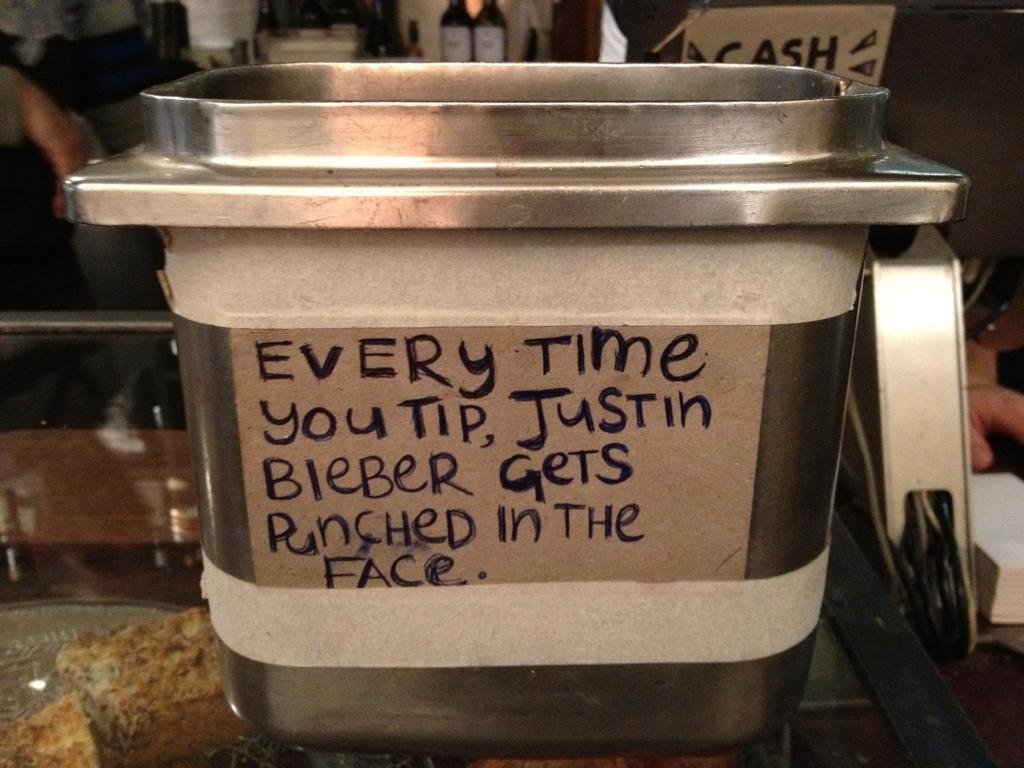 People either love him or hate him. That said, the vast majority of your customers that aren’t thirteen-year-old girls would probably be happy to tip if this tip jar idea were indeed the truth. We would suggest slapping this sign on a five-gallon bucket so you don’t run out of room.


14. You Deserve A Tip If You Recognize This 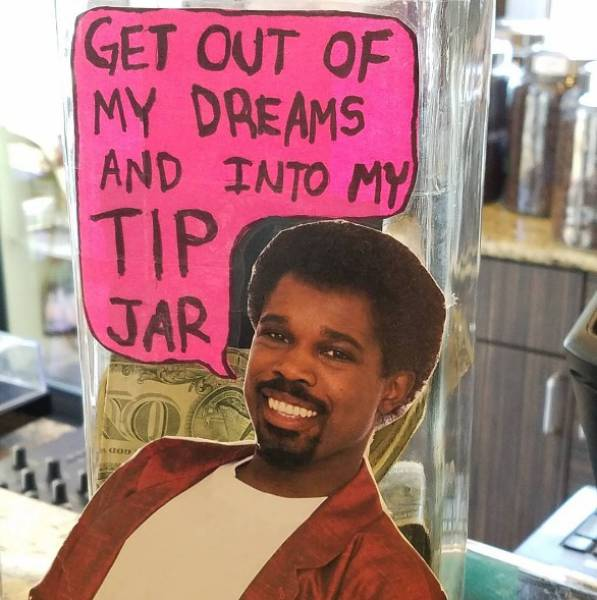 Back in the early 1980s, the singer/songwriter Billy Ocean was the biggest of the big. His song Get Out Of My Dreams, Get Into My Car spawned the line on which the above paraphrase is based: “Get out of my dreams, get into my car.” This may not appeal to those born after Mr. Ocean faded from the spotlight. But for a certain generation, this will spark fond memories of watching the video on MTV (back when all they showed was music videos). Businesses that cater to older clients might find this effective. If a big part of your clientele were born after 1990, you might have to explain this one. 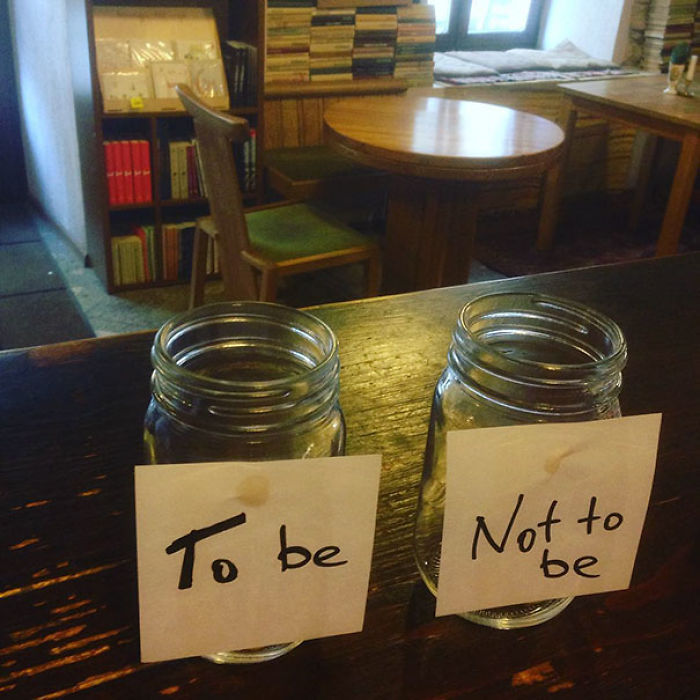 We like this tip jar idea for its simplicity. And for the fact that it managed to work The Bard into something as commonplace as soliciting for tips. It’s reminiscent of the old joke:

Descartes walks into a bar. The bartender walks up to him and says, “Would you care for a drink?” Descartes replies, “I think not.” and disappears.

It might take some thought (and a quick Google search) but you’ll eventually appreciate the humor in those three short lines. We promise. It’s the same with this tip jar idea. Reducing Hamlet’s impassioned and tortured monologue to a simple “X or Y” choice in an attempt to earn a few small pennies is brilliant on so many levels. Businesses with a high-brow reputation would do well to try this tip jar idea.

We use cookies to ensure the best experience on our website. If you continue to use this site, you consent to our use of cookies.AcceptPrivacy policy